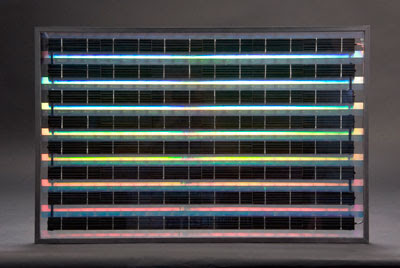 Prism Solar Technologies a company that specializes in manufacturing solar panels that use holographic technology to produce more power per square foot has recently increased their production capacity to 60 megawatts per year. The purpose of the holographic film is to filter the usable frequencies of sunlight and guide the sunlight directly into the solar cell.

By directing sunlight accurately into the solar cell this allows Prism Solar to develop a low cost solar panel since they’re constructed with less solar cell material compared to traditional solar panels. Basically Prism Solar is using the transparent holographic material between two pieces of glass to concentrate sunlight on the individual solar cells a panel is made up of.

The company claims the concept of using holographic concentration for solar power has been discussed in the technical literature since 1981. Solar panels require a high upfront investment because they’re made of silicon, which is an expensive element. Prism Solar says their solar panels use up to 85% less silicon than traditional solar panels while producing equivalent or in some cases more power. Have you heard of any other companies combining holographic materials with solar panels? Do you think Prism Solar has effective technology to reduce the cost per watt for solar panels?