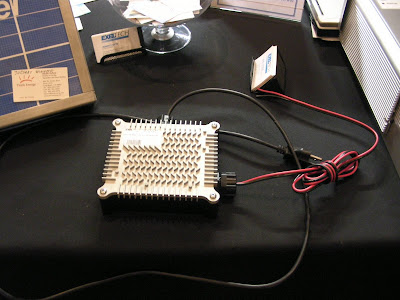 We’re in Las Vegas this week learning about new products at Renewable Energy World 2009….I’d have to say I’m quite disappointed since there are not many new products at the highly anticipated trade show, although I did run into a “game changing technology” in the works. ExcelTech, traditionally a manufacturer of off-grid inverters is working on a couple products to enter the grid tie inverter market.

According to ExcelTech, they have been working on their own version of a grid tie micro-inverter that attaches right to the back of a solar panel, similar an Enphase micro inverter. The demo unit at Excel tech’s booth even had a standard household AC plug that can be connected directly to the gird via a household socket. Very interesting don’t you agree?

Although ExcelTech said they have hundreds of these units in the field operating flawlessly, the company not released their micro inverter to the public because they want a solar panel manufacturer to integrate the inverter right into the solar panel so the micro-inverter itself can operate without connecting a DC disconnect to every unit, which is required by NEC code. Do you think ExcelTech can convince a solar panel manufacturer to build in their micro-inverter right into a solar panel? This is some game changing technology, would you not agree?