Jay Leno is a big fan of solar panels and wind power.

Today, after the Presidential Debates between Obama and McCain, one of the first commercials that aired was oil man T. Boone Pickens to join him on the Picken’s Plan Community to chat with him live about the energy plans laid out by both Candidates. As I was intrigued that T. Boone was fielding questions about his Natural Gas and large scale wind farm development through his chat room. One individual asked, “what do you think about powering your home or business with solar or wind power” and Picken’s replied “Jay Leno does it.”

Recently Jay Leno had T. Boone Pickens on his show as a guest and Jay mentioned that he was using solar panels and wind turbines to produce electricity for his garage. Jay Leno is infamous for having a collection of cars and the warehouse style build he houses his cars in is powered by renewable energy.

Jay Leno’s Green Garage has 270 x 200 watt General Electric (GE) Solar Photovoltaic Panels, which is a 54 kW system, that’s huge! In comparison the solar panel array on top of Jay’s Garage generates enough energy to power 10 average American homes. According to GE, the environmental impact of the system is equivalent to taking 200 cars off the road. Considering Jay has a huge fleet of cars in his collection, I guess it’s does not offset much in reality. 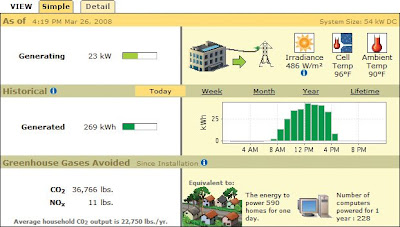 Jay is using Fat Spaniel Web Monitoring system to keep tabs on the output of the solar power system. He can easily log on a website that shows how much energy he is producing, consuming and exporting to the grid. Web Monitoring for solar power systems extend the customer experience after installing solar panels because the owner and their peers can see the benefits they are receiving by installing solar panels. 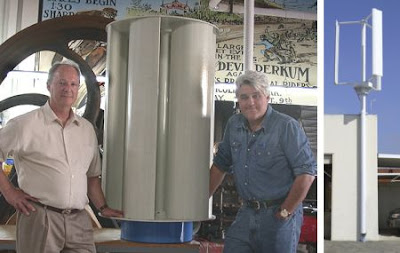 So you think a 56kW solar power system is large enough? Well Leno, did not stop there he installed a hard to get Delta II by Pacwind that is rated at 10kW. Pacwind makes unique vertical axis wind turbines and the best aspect of these turbines is that they can generate electricity at 5 mph. These turbines are simple to install, connect right into the gird and are maintenance free. Unfortunately, we called Pacwind to put these turbines on our website although they are sold out till next year! Seems like they have an interesting product we would like to investigate more.

It is great to see more celebrities jump into renewable energy systems and take the risks to show how effective these systems really are. Many people look up to people like Jay Leno and other celebrities, they are centers of influence in our society so when they start to commit and promote the benefits of wind and solar, the common American is not too far behind. What do you think?