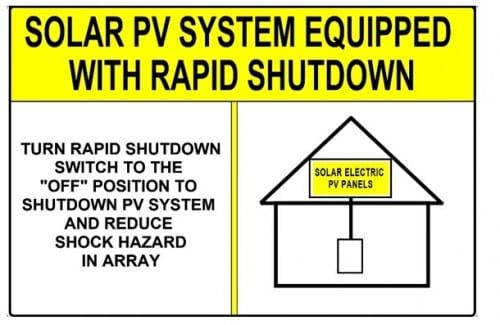 Most US states require solar energy systems to have rapid shutdown devices. The remaining states will follow soon enough as they switch to more recent versions of the National Electrical Code (NEC).

But what exactly is the rapid shutdown requirement and how do you stay compliant? This article will walk you through it.

What Is Solar Rapid Shutdown?

Solar rapid shutdown devices enable rooftop solar systems to de-energize quickly in an emergency. Without them, there’s no safe way to turn a solar system off. Because even if the inverter is off, solar panels still generate power whenever the sun is shining.

So if there’s been an emergency, and you’ve called firefighters, there usually isn’t time to figure out how to deal with live solar conductors.

That’s why rapid shutdowns became an electrical safety requirement in the National Electrical Code (NEC). The main purpose is to keep first responders safe from exposure to live electricity sources.

A new version of NEC code is released every 3 years. While the most recent one was released in 2020, 18 states still use NEC 2017. Moreover, when it comes to rapid shutdown requirements, there aren’t any significant differences between NEC 2017 and NEC 2020.

Distance From the Solar Array

Why Is Rapid Shutdown Required for Solar?

As mentioned, rapid shutdown is required as a fire safety measure. In the unfortunate event of a fire, first responders typically get on the roof to access the upper floors and vent smoke out of the building.

If there’s sun, your PV array is generating voltage which could be dangerous to firefighters who need to focus on putting out the fire without worrying about the potential dangers of high-voltage PV conductors. A rapid shutdown system removes this danger with a single switch or button.

How to Meet the Solar Rapid Shutdown Requirements

The first step is to determine which version of the NEC code is enforced for solar installations in your city or county.

If it is NEC 2014 or higher, a rapid shutdown system will be required. Then, the easiest way to meet rapid shutdown requirements is to install a system that is already listed or field labeled with rapid shutdown capabilities. For example, the SolarEdge system incorporates DC optimizers at every solar panel, while Enphase incorporates microinverters installed at every panel. These devices shut off the power around and within the solar array at the flip of a switch, so there is no need for additional equipment.

You still have options if you want to install a more traditional central inverter. For NEC 2014 compliance, include a rapid shutdown device on the roof at the edge of the PV array and link it to the switch at ground level.

To meet NEC 2017 requirements, install module-level equipment to manage the rapid shutdown at each solar panel. Remember, you need to install it at the same time as the solar panels.

When in doubt, reach out to our experts to ensure that your solar installation will comply with rapid shutdown requirements. They will walk you through the whole process of choosing the right equipment for your project and ensuring your solar energy system complies with NEC.