Solar 101: What’s the difference between microinverters and string inverters? 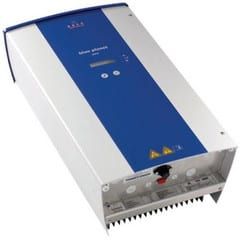 If you’re a homeowner or an installer doing residential or small scale commercial solar installations, you essentially have three choices for converting the solar system’s DC power into AC power: You can either go with new microinverters or with string inverters—with or without DC power optimizers. All will work, but there are differences, especially in certain situations.

With residential string inverters, all solar modules are connected in a series circuit to a DC electric cable, which is then connected to a single inverter box mounted on a wall by the home’s main AC panel (as well as to any required DC disconnects). So it’s a very centralized system with a limited amount of labor.

Modern string inverters not only convert the power from DC to AC, but also use Maximum Point Power Tracking (MPPT) to deliver the maximum amount of power available. This is important, since each solar panel can produce different amounts of power due to manufacturing anomalies, intermittent shading, leaves, dirt, passing clouds, and/or other factors.

While a string inverter’s MPPT works fairly well, especially in sunny areas with no obstructions, having all solar modules tied in a series circuit can still be a disadvantage for several reasons:

1) MPPT technology is essentially drawing the average amount of power available, rather than the full amount available from each module. As a result, the entire solar array can lose 15% to 30% or more of its full potential output because one or more panels in the string are temporarily shaded or have debris.

2) If you have limited roof space and need two arrays with different sun orientations, each array will need its own string inverter.

3) Similarly, since module mismatch can cause efficiency issues, you’ll need to use the same brand and panel voltage within each string.

4) String inverters don’t easily allow for expanding the system in the future unless you purposely oversize the inverter, wiring, and other BOS parts.

5) While it’s common to have online monitoring with string inverters, the monitors only measure the performance of the entire array. So, if an array isn’t producing the expected power, installers will need to individually test each panel for malfunctions.

6) String inverters are typically warrantied for 10 years and have an expected lifetime of 12 to 15 years, while solar panels typically last 25 years or longer. Thus, the string inverter will need to be replaced at least once.

Microinverters – Inverters for one solar panel at a time

In many ways, microinverters do all of the things that string inverters do and power optimizers do—all in one small and simple package.

Unlike centralized string inverters, microinverters convert the solar panel’s DC watts into AC watts at the module level and then connect in parallel to the main AC box. While panels with microinverters aren’t exactly “plug and play,” they do make installation and monitoring very simple.

1) MPPT tracking of each solar panel. As with DC optimizers, each solar panel can harvest as much solar power as possible, regardless of the intermittent shading, passing clouds, or the mismatch of other panels in the array.

2) Individual panel monitoring. If the array isn’t performing as expected, the microinverter monitoring system will show which panel(s) is at fault and can even send you an immediate email alert.

4) Easier design and installation. Especially when using pre-mounted micro-inverters or true AC panels, designing and installing a micro-inverter grid tied system can be much easier and faster.

5) Microinverters are typically warrantied for 25 years. As a result, there shouldn’t be a need to replace the inverters at year 12 or 13.

So what’s not to love about microinverters? A few things to consider:

Bottom line, both microinverters and string inverters with or without optimizers work well, but each has its own set of risks and advantages. Choose the technology that’s right for your insolation, budget, and size.