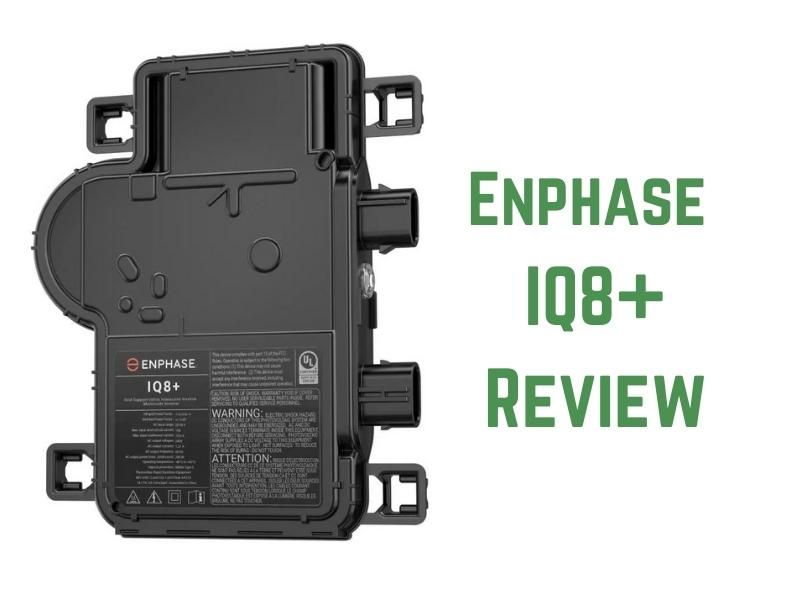 The Enphase IQ8 series is the latest addition to Enphase’s line of microinverters, and it comes with a very hefty promise: backup power without solar batteries. That’s something that hasn’t been done before in the solar industry, so we wanted to review the IQ8+ in more detail to see what it’s really capable of.

Until now, homeowners looking to protect against grid outages have needed to invest in a battery bank for local backup power (or just compromise and live with the occasional outage).

The IQ8 series pledges to change that with its new “Sunlight Backup” capabilities. If the grid goes down, IQ8 systems can provide limited and conditional home backup by pulling electricity straight from the solar array.

There are very clear limitations – namely, that backup power is only available when the sun is out (hence the name Sunlight Backup). But given that it gives homeowners access to at least some backup power without spending a cent on batteries, the IQ8s are likely to be a very appealing choice for homeowners looking to go solar.

In this article, we’ll review the Enphase IQ8+ from the ground up, covering its new Sunlight Backup feature and comparing its capabilities to its predecessor, the IQ7.

Both the IQ7 and IQ8 provide a flexible and efficient solution for homeowners to go solar. But only the IQ8 can deliver on the promise of limited backup power without batteries.

The new IQ8 is branded as “grid-agnostic,” meaning that it can function with or without a connection to the utility grid. This is made possible by the IQ8’s faster processing speeds, which can react to electrical loads being added or removed from the system within 20 nanoseconds.

That’s fast enough that your system can create a stable local AC microgrid to process the output directly from your panels. Essentially, the system creates a small local power grid on your property, so electricity doesn’t need to be sent to the utility grid for DC to AC conversion.

Now to be clear, this comes with a very strict limitation: Sunlight Backup scales with the amount of sunlight hitting your panels. At night, you won’t have backup power at all. At dawn and dusk, you’ll have a limited amount of backup power available because solar irradiance is lower. The graphs below from Enphase’s IQ8 demo presentation explains the concept nicely.

On completely sunny days, IQ8 systems will have access to the full capabilities of the solar array. As sunlight gets less intense during the winter, the available backup power drops accordingly.

Solar shoppers who are interested in the IQ8s should be aware of these limitations and set realistic expectations for their system’s backup capabilities. Sunlight Backup is a wonderful perk that provides spot backup under the right circumstances, but if you want coverage at night or during severe weather events, you’ll need a full battery bank to take on the task.

For more information, see our overview of Enphase Energy Systems, which describes how Enphase components can be mixed and matched to accomplish exactly what you need with your solar system.

A few quick notes worth mentioning about Sunlight Backup:

See Sunlight Backup in action with a demo from Enphase labs:

While Sunlight Backup is unique to the IQ8s, both the IQ7 and IQ8 offer powerful and flexible options for homeowners looking to go solar. Let’s back up a bit and go over why you might choose the Enphase IQ series over other types of inverters.

The IQ series microinverters are small inverters that attach to each solar panel in your system. Microinverters isolate the output of each panel, allowing them to produce independently from the rest of the array.

The distributed nature of microinverter systems (with each panel assigned to its own inverter) has several advantages. Because each panel can be monitored and controlled independently, the system is more resilient to failure: when the output from one panel drops, the rest of the array keeps producing at full capacity. This can limit the impact of shading, or help isolate a malfunctioning panel from the rest of the array.

If you expect your roof to be partially shaded, both the IQ7 and IQ8 will help you get more production from your panels.

In string inverter systems, strings (or groups) of panels are restricted to a certain size based on the electrical characteristics of the inverter. In such cases, strings of panels will need to be installed together & facing the same direction to be most effective.

If you have a small or odd-shaped roof, it may not be possible to fit a string of 6-12 panels on the same roof surface. The IQs solve that problem: since each panel + microinverter pairing is like a mini self-contained solar power system, there are no restrictions on string sizing or layout. Each panel can be installed at its own angle / orientation without impacting the rest of the system’s output.

With all-native Enphase components available for both grid-tie and backup power solutions, it’s easy to start with a small system and add more functionality down the line. There’s no expensive rewiring or complicated inverter coupling involved. Simply route the new components into your existing IQ Combiner and System Controller.

The flexibility of Enphase systems means you don’t have to wait to go solar. You can start small, with 25-50% offset, and begin rolling back your bill and contributing to a greener future. It’s always possible to add more panels and reach 100% offset when you’re ready!

Enphase microinverter systems can easily be expanded to include partial or full-home backup with the addition of their IQ3 / IQ10 series batteries.

If you need overnight backup or live in an area vulnerable to frequent outages, Enphase's backup power systems can give you greater control over your energy generation and usage. The all-native Enphase components make installation as simple as possible, whether you're installing a new system or expanding an existing one.

Read our overview of Enphase Energy Systems to see how to include backup power with your solar kit.

Perhaps the most appealing part of the IQ microinverters is their 25-year warranty, designed to match the performance warranty on most solar panels. Nothing else in the industry compares. The SolarEdge HD-Wave has a default 12-year warranty that can be extended to 20-25 years, but that comes at an additional cost.

While string inverter systems cost slightly less up front, those savings are usually negated when it’s time to replace your warranty halfway through your system’s lifespan. In that light, IQ microinverters are a better value and more convenient in the long run.

Ready to go solar? Our team can design a custom Enphase solar kit that is tailored to suit your unique needs. Our DIY solar kits have made solar attainable for more Americans than ever, and we’ve been featured on CBS, NBC, and USA Today for our work. Reach out for a free solar analysis for your home to get started!