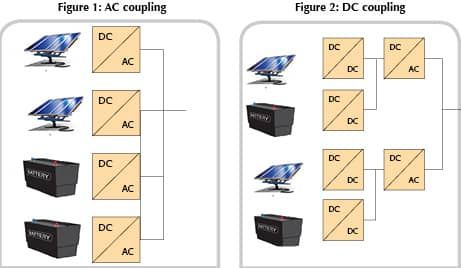 It is becoming more popular to install batteries with solar power systems on new installations and as retrofits. One of the questions to be answered when planning the battery installation is how will the battery system tie in with the solar. The answer will be either AC coupling or DC coupling.

Deciding which way to do your install, depends a lot on what other equipment you plan to use or what equipment is already in place if you are retrofitting.

If you are working with a string inverter, then you have DC power coming from the solar array to the inverter and you can easily use it. There are few different ways to do DC coupling. One way would be to connect the output of the solar panels to a charge controller which charges the batteries and then you would have a battery-based inverter that changes that battery power to AC power. This is a very typical set-up for an off-grid system like the Outback SystemEdge Villa or Cabin Series packages.

Another way to DC couple is to use an inverter like the SolarEdge StorEdge that will take the DC power from the solar panels and allocate it to the batteries or convert it to AC as needed. This gives the system a much higher efficiency than most other battery systems because every time the power is conditioned or converted, there is a small loss. If you run from solar panels to a charge controller to the batteries to the inverter. You will have a loss at the charge controller, a loss at the batteries and a loss at the inverter while the StorEdge system manages the power from the solar array in the most efficient way possible converting it directly to AC to run the home without it having to run through the batteries unnecessarily.

One thing you should definitely watch out for when planning your system is the capabilities of the equipment you are using. Some battery-based inverters can be AC coupled to grid-tie inverters but they can not use the power from the solar panels to charge the batteries because regulating that charging process is difficult. This means that you would charge the batteries from grid power and if the grid goes down, you can use the solar power and battery power to run your home but only until the batteries are empty. After that you will be in the dark with the rest of your neighbors because your system is not capable of re-charging the batteries with the power from the solar.

So, if you want batteries with your solar, you will have to choose between AC coupling and DC coupling. That choice is best made by considering the application and paying attention to the capabilities of the equipment you are purchasing.