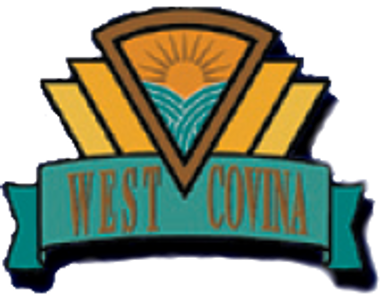 I find it quite ironic that the City of West Covina has the Sun in their city seal because there is one thing I can guarantee you, West Covina does not support solar energy. I learned this the hard way through the miserable process of working with City Hall to obtain a permit to install solar panels in my backyard. I was born and raised in West Covina and had a great experience the 26 years I have lived in this city, although that changed in a heartbeat when I began working with the city on our project, the battle of the solar panel brands.

All I wanted to do was install a few solar panels, using UL listed parts and a very popular pre-engineered ground mount called GroundTrac made by ProSolar that has been permitted all over the US. When I first started the project I thought obtaining the permit would be a breeze since we’ve helped many of our customers secure permits for their projects. Plus, I had Dennis Epp of Heritage Solar wet stamp the plan set.

Dennis is a well respected electrical engineer, C-10 contractor, and NABCEP Certified Solar Installer and his company is a top solar contractor in Southern California. Going into the project I figured the City of West Covina would be appreciative of a homegrown citizen putting together such an important project that would help solar energy move forward, but boy I was wrong.

I was confident our plan set was in good order before submitting it, because I googled “West Covina photovoltaic permit” and found a document on westcovina.org titled, Basic Information Required for Photovoltaic Plan Check Submittal.

I submitted the three copies of the plan set on December 8th and was instantly approved by the planning department. When I got the Plans to Building and Engineering, that’s where things started to get rocky.

They wanted a fee to “check my plan” and if I wanted an expedited check I would have to pay an even higher fee. I paid $166.50 for the “expedited plan check” which guaranteed me a response on my project within 7 working days, in our case that would be December 21st, since the city does not work on Friday. On the 6th the working day, I stopped in unexpectedly to check on the status of my project and they told me the plan checker had not even looked at our plans yet, at that point I could smell the trouble ahead of me.

One of the plan sets we submitted went to the West Covina Fire Department. They called me on December 15th and told me they approved the plans, although I would have to pay them $200 to receive it and submit it back to Building & Engineering.

On December 22nd at 9:46a, the 8th working day, a day late I get a call from Building & Engineering department informing me to come pickup my plans. When I received the plans I noticed the plan checker had made over 30 correction requests, now if they were reasonable requests I would have not been so aggravated, but in our case the majority of the requests he made were already in the plan set!

Also the plan checkers requests were made in sloppy handwriting, which made it even more time consuming to decipher the silly requests. At that point, putting the facts together, I realized that the plan checker had rushed through our plans because he procrastinated till the 7th working day to check our plans, how frustrating! Contacting the plan checker or meeting with him face to face was nearly impossible since he was always “in the field” or not working and he never replied to any of my emails. He did call me once to discuss the validity of his requests and the conversation was very defensive versus collaborating with me to get our plans approved. 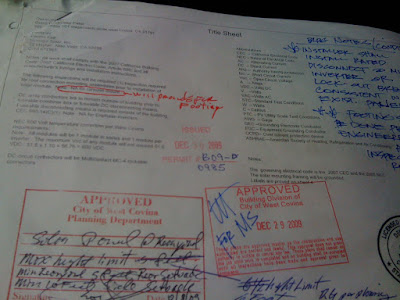 To make a long story short, after going back and forth with the Building and Engineering for 6 working days, they issued me the permit on December 30th and charged me another $457 for obtaining the Building and Electrical permit. The entire process took a strenuous 12 working days. We’re not launching a rocket to the moon! I’m just trying to install a few solar panels, this project should have taken no more than a couple hours to approve and should have been done over the counter with minimal fees!

To go solar City of West Covina charged me:

Shame on you City of West Covina for putting me through 12 days of non-sense and extorting $824.50 from me for doing the RIGHT thing. Encouraging the adoption of solar power is critical to lift our economy out of the recession because our industry creates green jobs and wouldn’t you agree that energy is a huge problem for the entire world?

Solar Power is such an important element to both social and economic progress and through this project I’ve realized that the primary road blocks lies within our own communities. It was extremely annoying to see other people acquire permits to install gas water heaters or even upgrade their electric service to pull more AMPS with ease, especially when those activities are much more dangerous than installing solar panels. Unfortunately, what that means is the process will be much easier if you want to increase your energy consumption, but if you want to be producer and contribute to the grid, then you’ll have to pay a lot and jump through hoops.

What’s next? We’ll after the city comes to inspect all the digging we have done, then we can proceed to build out the solar array. I have a meeting with Congresswomen Dr. Judy Chu, to share my horror story of going solar in the 32nd congressional district and on January 19th, I will be speaking at the West Covina City Council meeting to inform them they’re in clear violation of California Civil Code 714, also known as the California Solar Rights Act of 1978, a little known law that is lightly enforced but prevents any city within California to make the process of going solar unreasonably difficult or expensive.