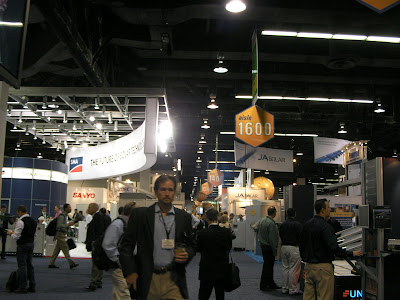 With over 26,000 thousand people attending Solar Power International 2009 at the Anaheim Convention Center on the last week of October, the conference broke attendance records. The massive exhibition hall featured 929 solar companies throughout the entire solar industry supply chain. This year show was so large in scale, it was way too easy to get lost between the aisles of exhibitors. My objective of being at Solar Power International 2009 was not to visit every booth, but to scout out cutting edge solar photovoltaic technology. Here’s what I think was cool at the show this year: 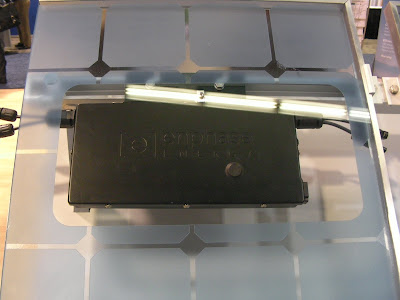 The new Enphase D380 “TwinPack” Micro-inverter offers double the power at half the labor. The new D series product line focuses on the needs of a commercial installation in which it’s much too cumbersome to install an Enphase M190 unit behind each solar panel. The Enphase D380 is called a “TwinPack” because it has two Micro-inverters within one housing.

The benefits include, reducing installation costs through the two in one design, Reduced balance of system costs and installation time are realized through a 50 percent reduction in the number parts, 33 percent fewer connections and junction boxes, the Enphase D380 also reduces installation time by an innovative cabling system. 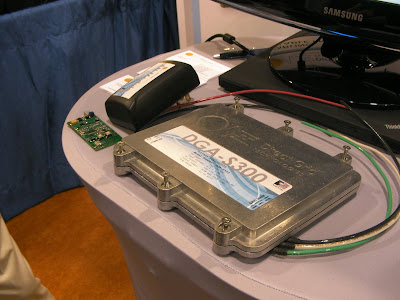 Soon Enphase Energy is not going to be the only one offering a solar micro-inverter. DirectGrid, a company based in New York is developing it’s own version of a micro-inverter that will initially only work combined with thin film solar panels and also have the option to add on smart grid compatibility. Direct Grid Technologies is a new player in the solar micro-inverter space but is a subsidiary of Island Technology which is in the business of the design, manufacture and support of utility power grid monitoring & distribution systems.

The picture of the mirco-inverter above shows the Direct Grid Technologies DGA-S300, which has an AC output of 300 watts 120/240 volts 50/60 hz. The DGA-S300 has a nominal DC input range of 12-170 volts, which is a wide range to accommodate many types of thin film solar panels. 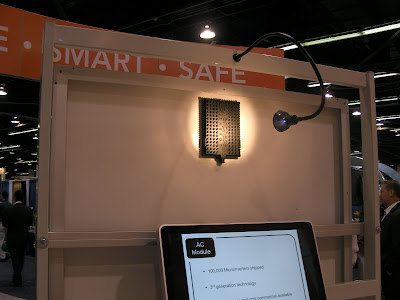 Solar Panels that come off the manufacturing line with micro-inverters integrated are going to be the next trend in photovoltaic technology. As solar micro-inverter technology continues to improve and shrink in size, this could be the game changing technology that can make solar much simpler and more cost effective to install. Enphase had an interesting AC module for display that had a prototype inverter built into directly into the solar panel! 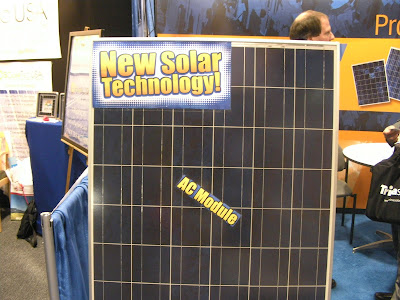 Solar Power Industries has partnered up with veteran solar inverter manufacturer, ExelTech to offer their own version of a AC solar panel. ExcelTech has been testing micro solar grid tie inverters for years and has an inverter design that has been field tested that is nearly ready for market! I think there are going to be a few companies releasing AC solar panels into the marketplace sooner than most people think. ExcelTech is supplying the micro-inverters to solar panel companies that integrate them into a solar panel, there are NO exposed DC cables. Unlike a typical solar panel in which you would see a junction box, an AC Solar panel has a mirco-inverter in place of a junction box.

Every solar conference I’ve attended this year I’m starting to seeing more LED lights being offered. Finally the relationship between the LED lighting and solar energy industry is starting to develop. This year I saw both LED Streetlights and LED lights for residential and commercial buildings being displayed at select trade show booths. We need more people in the solar industry to help customers reduce consumption and then produce clean energy, LED Lighting is a critical product that can help us “reduce then produce” 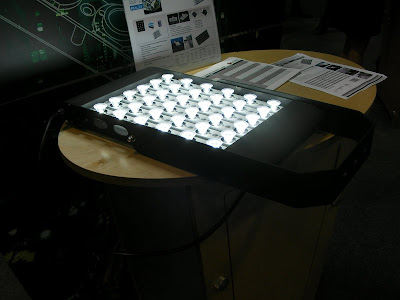 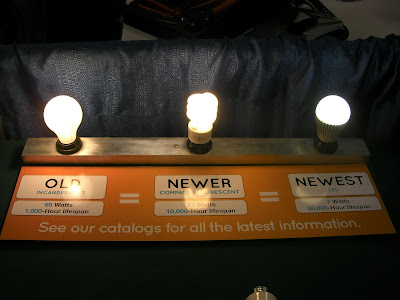 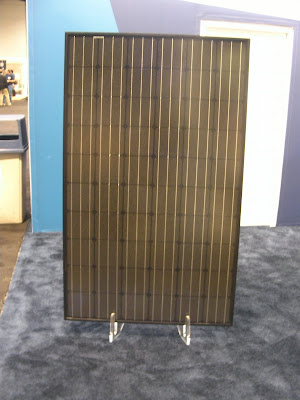 Aesthetics is a major roadblock for mainstream homeowners to go solar. Not everyone enjoys seeing blue solar panels with silver frames and white back sheets on top of their roofs especially if the proper orientation requires the solar panels to be installed on roof facing the street. Say bye-bye to old school blue solar panels, blue is the new black. 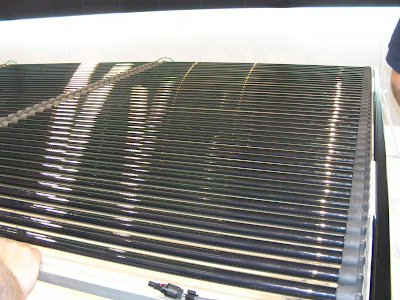 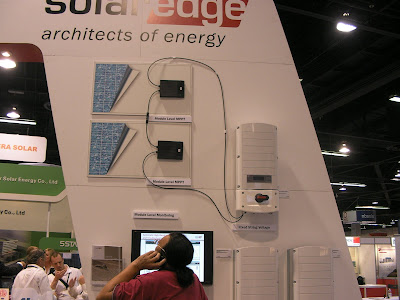 One of the downsides of owning a central string inverter is that every solar panel tied to the inverter will not be able to take advantage of MPPT (maximum power point tracking), which enables solar panels to harvest the most electricity as possible. Power optimizer solutions like the SolarMagic by National Semiconductor and SunMizer from Xandex allow photovoltaic system owners to increase solar power system output by assisting strings that are losing power due to mismatch, soling and shading issues.

SolarEdge has taken it a step further to combine central string inverters with power optimizers all in one offering at the same cost of buying a traditional central string inverter. The unique offering SolarEdge brings to the table is allowing each solar panel connected to its inverter to achieve MPPT since their product includes power optimizers. Central solar inverter, with module level MPPT at the same cost of traditional grid tie inverters, makes this company’s value proposition very unique. 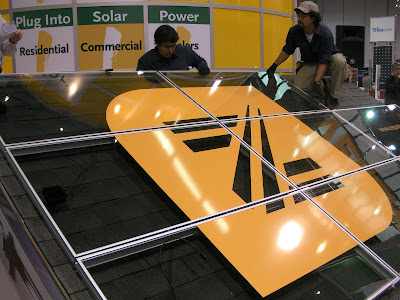 ZepSolar is innovating big time in the residential solar panel mounting. The rail free solar panel mounting system reduces both the number of parts and installation time significantly, thus making the process more efficient and cost effective for people who want to install solar on residential rooftops. Instead of using rails that traditional solar panels mount onto, ZepSolar directly connects the frame of “ZepSolar compatible” solar panels right onto the the roof.

Reducing parts means reducing labor and cost which not only benefits installers but homeowners too. Efficiencies throughout the entire solar value chain is the key to taking solar power mainstream and ZepSolar is a great example of new trends in solar panel mounting that increase efficiencies, wouldn’t you agree?

I’m sure I didn’t capture it all, did you see anything cutting edge at Solar Power International 2009 that I missed?