Carter’s solar panels at the Smithsonian 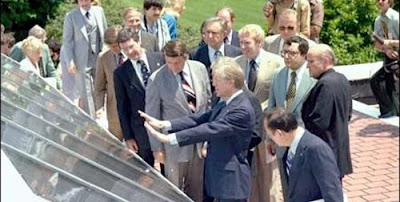 Back in 1979 the Jimmy Carter Administration created the “Solar America” initiative, aimed to help Americans go solar, the White House itself was retrofitted with solar panels that heat water. Fast forward to 1986, Reagan removed the perfectly working solar panels, I wonder why? In 1991 the solar panels once used to heat the water at the White House were sold to Unity College which used them to provide hot water to their college cafeteria until 2005, the point in which the solar hot water system reached its lifetime.

Recently the The Smithsonian’s National Museum of American History purchased the solar panel and have put them up for display. President Carter installing solar panels at the White House in 1979 serves as great symbolism of how the Carter Administration wanted to shape the energy future. What happened? Why did we go off track until today?