Day two at Intersolar 2009 was action packed. I had a really busy day but managed to get you’ll some shots of some really cool products right from the tradeshow floor. 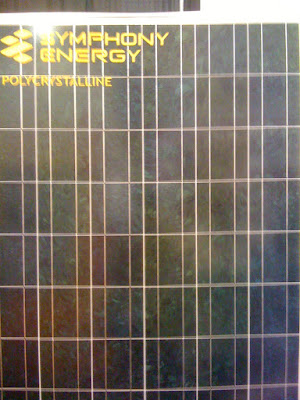 Symphony Energy has released the first “green” polycrystalline solar panel. Typically solar panels have either a blue or black color to them, although Symphony decided to change up the color for aesthetic reasons. 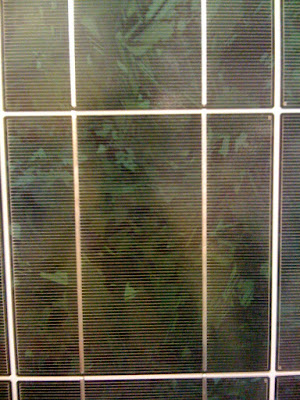 Walking around the trade show floor, I noticed all the solar panels started to look the same. By changing the color of the polycrystalline to green the company made their product standout. Their putting the words “going green” in their product literally. What do you think about green solar panels? Would you put these on your roof? 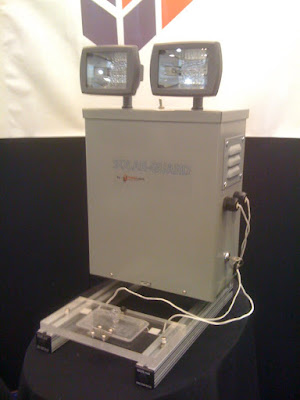 I wrote about Gridlock Solar Security a few days ago, today I got to meet them in person to talk about their advanced solar panel security device. Similar to a burglar alarm, once the alarm has been triggered the unit not only flashes and sends out an annoying siren but contacts the police and dials telephone numbers that you can program the unit with. This is one of the most unique products I saw at the show because it really focuses on reducing a big problem in the industry, solar panel theft. 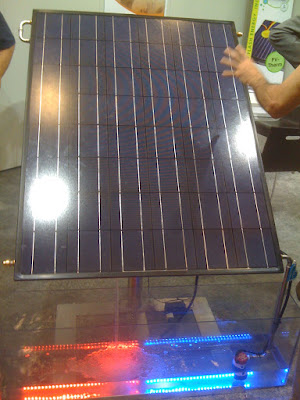 The limitations of solar panels today is there are two different types of systems. photovoltaics generate electricity while solar thermal heat water. What if you can have one system that can both produce electricity and provide you with your hot water needs? PVTherm is doing just that, they’ve created a solar panel that heats water and produces power with the same solar panel! You can maximize surface area by having one system that take cares of two needs. 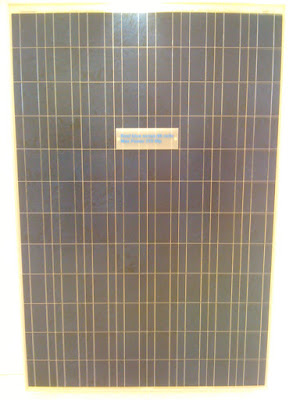 Typically polycrystalline solar panels that are on rooftops are a couple hundred watts but this monster solar panel from Best Solar is 370 watts with a huge footprint. So massive it would be impossible for a couple people to carry this up to a roof.

You would need a crane to get this solar panel installed. We asked the Best Solar representative what type of applications this large of a solar panel would be used for and he said that these solar panels are made for utility scale projects since these monster solar panels produce a lot of power and make it more difficult to steal.

Intersolar 2009 has been a great trade show so far, we’ve seen a lot of the same but there has been a handful of unique products that are going to make a large splash. What do you think?