Home » News & Events » around the world with solar energy

around the world with solar energy 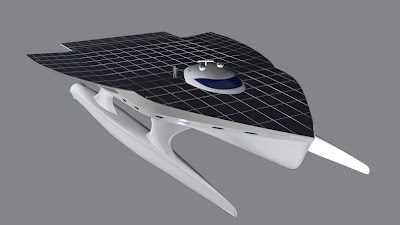 Magellan was the first person who attempted to circumnavigate the Earth back in the 1500s. Back then ships were powered by the wind by using large sails to catch prevailing winds to propel the vessel forward. Magellan and other sailors of their era depended on renewable energy to help them achieve their goals.

PlanetSolar, is an organization that is planning to circumnavigate the Earth in 2010 using a ship powered entirely by the sun. The surface of the ship will be composed with solar cells basically turning it into a giant sunlight collecting power generator to propel the ship on it’s voyage. The solar panels will power an electric engine that allow the ship to achieve speeds of up to 10 knots.

The plans are for two people to sail on a 120 day trip following the equator and stopping at various ports along the way to promote solar energy, how cool is that? I think this is a great project to help people realize the true power of solar panels and how they can be applied in many ways to energize our lives. What do you think about PlanetSolar’s voyage?