solar power as an investment 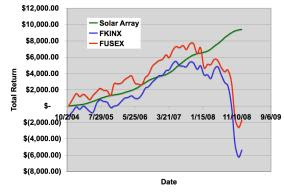 Edward Simburger, an electrical engineer and owner of a grid tie solar electric system on his home published a research paper called, “Residential Photovoltaics; An Investment Vehicle for Retiree’s II” which answers the question if solar power should be part of everyone’s investment portfolio.

In his paper, Edward compares an investment in a solar electric system to financial indexes and concludes that in investment in photovoltaics provides a better return since it’s low risk and has built in inflation protection.

Edward collected the data for the solar electric system from the system installed on his own home in California. As electric rates continue to increase the rate of return on a solar electric system also increases. With rebates, tax credits and other incentives given by local, state and federal governments, today solar power is a much safer investment than the stock market, wouldn’t you agree?