premium roofs with a hidden talent 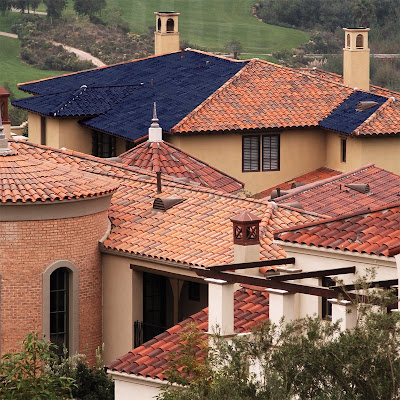 There are many homeowners with clay roofs that want to harness the power of the sun to generate clean electricity but don’t want to install bulky solar panels on their premium roofs. SRS Energy is offering a product called Solé Power Tile which integrates seamlessly with traditional US Tile’s clay tiles to maintain the depth and aesthetics of a sophisticated roofline while infused with solar photovoltaic technology.

The Solé Power Tiles have been tested under harsh conditions for durability, including UV stability, color fastness, wind resistance, electrical output, safety, and extreme mechanical stresses. The tiles install just like traditional roofing, but are even lighter than their ceramic counterparts.

Each Solé Power Tile is 37.4 inches wide and 18 inches long. 30 tiles, weighing 240 pounds can fit in a 100 square foot surface area. The tiles can generate 500 watts per 100 square feet. What do you think about Solé Power Tiles? Do you think more homeowners would adopt solar photovoltaic if it can be integrated right into the roof?