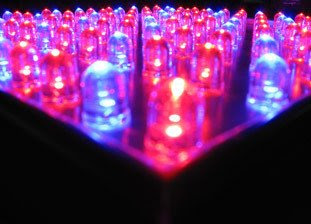 The people who use the most electricity are more likely to make investments in technology that reduces their consumption. Indoor growers all over the world are feeling the pinch of raising electric costs and are flocking for alternatives to lower their bills. Until recently, indoor growers had no options but to use inefficient and ancient lighting technology to grow their plants. Often not only would the cost of running the lights add up, but since these inefficient high pressure sodium lights create a lot of heat, many times the light itself has to be air cooled which adds to the electric costs of operating the lights.

LED (light emitting diode) technology has recently dropped in price and advanced in terms of efficiency which has attracted many indoor growers to consider swapping out their old energy sucking gas based light bulbs for the next generation in lighting technology LEDs. The advantages of LED grow lights is not only that they cost only a couple dollars in electricity to run all year but they don’t emit much heat which allows the indoor grower to put the light source closer to the pant, increasing yields.

LED Grow Lights deliver energy that plants need in the exact spectrums that are most effective to induce healthy and consistent plant growth. The GrowLED system allows you to target individual wavelengths (Blue, Red) or combine both to create the most effective growing environment for your plants, Some of the best responders to the light LED output include Tomatoes, Peppers, Basil, Lettuce, Violets, Orchids, and Roses. Food producing plants respond particularly well allowing you to have fresh produce in your house year round at a low cost.