Home » Tech » up close and personal with SolarMagic

up close and personal with SolarMagic 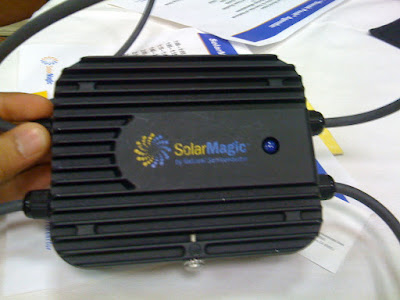 When using central inverters there is a lot of room for inefficiencies to creep into the solar array due to factors such as shading, architectural obstructions, shade from intermittent clouds and even bird poop can result in less energy output compared to the solar array’s full potential. Today I spent the afternoon with National Semiconductor’s renewable energy division learning about their new product called SolarMagic. 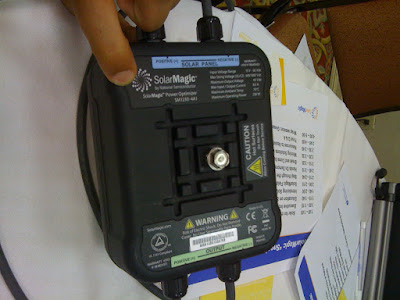 You have to think of a string of solar panels connected to a grid tie inverter similar to Christmas lights, if one bulb goes out on a string of Christmas lights, a group of bulbs are affected. National Semiconductor introduced their solution to solve the “Christmas light syndrome” solar panel arrays face in the real world. SolarMagic a “power optimizer” maximizes energy harvest from a solar array by piggy backing to every solar panel on a single string or the entire array to control the MPPT (maximum power point tracking) on an individual solar panel basis. 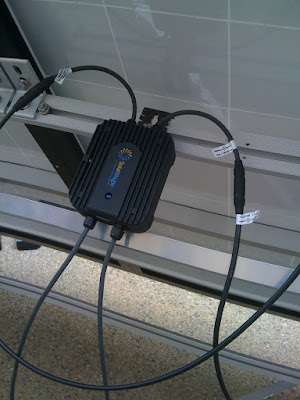 Think of it as adding a small computer behind each solar panel to get them to work together in harmony and produce more kWh (kilowatt-hours) on a annual basis. Shading has a detrimental effect on the performance of a solar electric system, if 10% of a solar panel array is shaded it can equal up to a 50% power loss! This is one of the key problems that makes SolarMagic a good investment for solar electric systems with power mismatch issues. 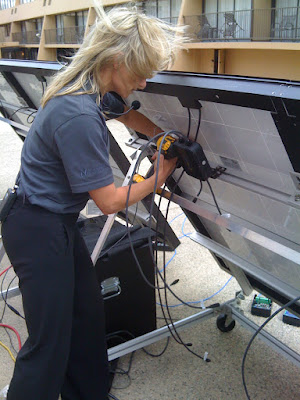 The technology behind SolarMagic monitors and maximizes the energy harvest of each solar panel and recuperates up to 50% of the energy lost in solar panels that are under performing because of mismatches. I think the magic behind the product is the ease of installation, its so easy this blonde lady (hahaha!) was able to install it under 5 minutes. National Semiconductor did a good job making the process of implementing their product very simple, there is a postive and negtive input and output to the SolarMagic which really takes the guess work out of how it connects up. 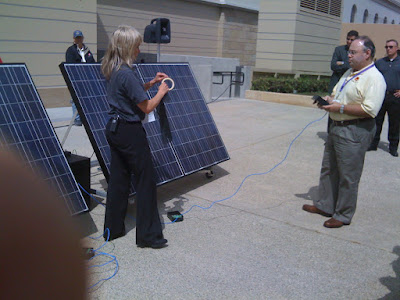 The field test was where National Semiconductor put their money where their mouth was by showing us a real test of how power output between a SolarMagic “assisted string” versus a traditional string. We got to shade the solar panels to see a side by side comparison of how the SolarMagic works in real world conditions. After we saw the increase in performance, the next question everyone wanted the answer to was, how much??

According to the National Semiconductor team, the MSRP will approximately be $199 per unit. Depending on your situation this product could be a good fit for your solar electric system. 1 out of 5 houses do not go solar because of shading issues, but thanks to this new technology, solar power can become a feasible investment for even more people.

I think this is a great product since the product is solving a huge problem that has been overlooked in this industry. Making each string “smarter” is a good way to increase solar power efficiencies without just focusing on the solar panel itself. What do you think about SolarMagic?