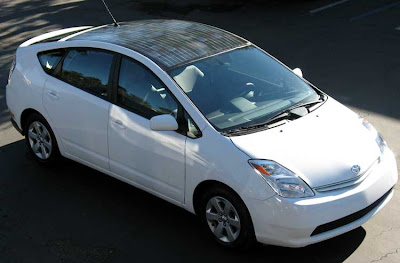 There’s been a lot of buzz on the Internet about a full electric car being developed Toyota that can be recharged by the sun through built in solar panels and a solar electric system on your home. I think many people mistranslated the news about Toyota’s solar power plans released by Nikkei Japanese Newspaper and assumed that the entire car could be recharged through its built in solar panels.

The story has created a lot of controversy if Toyota could develop a car charged completely by solar panels. What I think is with current solar technology the built in solar panels into Toyota’s solar powered car could only aid in recharging the battery and the car would have the capability to plug into an AC outlet to fully charge the battery. Today, solar cells are not efficient enough to be very effective on limited surface area of a car. In the near future as solar panels become more efficient and you can generate more watts per square foot, a car will have enough surface space to generate a lot of power, but its going to take at least 5 years to get to that point. What do you think?

By the way, the idea of people charging their electric cars from their solar electric system on their home is being done by pioneers who have been advocating electric vehicles and solar power for decades. I’ve met people here in southern California who have been living with solar panels and electric cars on the National Solar Homes Tour.