Home » DIY Solar » Is thin film the future of solar?

Is thin film the future of solar? 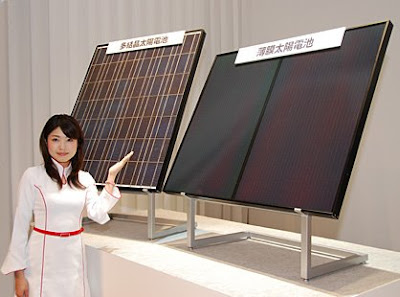 Sharp Solar is betting on thin film. The company announced, they’re increasing their thin film production line from 15 megawatts to 160 megawatt capacity annually with the completion of it’s factory in Katsuragi, Japan. Sharp Solar increased the second generation thin film solar panel efficiency rate to 9% and offers a rated output of up to 128 watts per solar panel. Don’t expect to put these solar panels up on your house anytime soon, since the efficiency per solar panel is lower than traditional silicon based solar panels, thin film is better suited for projects with a vast amount of surface area.

For example, if you were putting up a solar farm and space was no issue, well thin film would make sense, because you make up the lack of efficiency with space. But if you have a small roof, less surface area to work with, you want a highly efficient solar panel such as the Sanyo HIT solar panel, since it produces more watts per square foot. Until thin film technologies increase their efficiencies significantly the technology will not gain serious traction in the residential market. What do you think? Will the residential solar market see a highly efficient, dollar per watt thin film solar panel anytime soon?