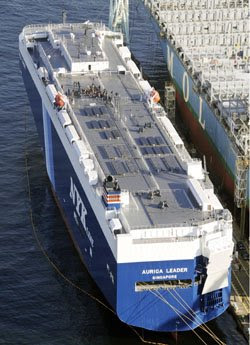 Some of the solar panels we sell end up on cargo ships to get to the customer’s destination. Wouldn’t it be cool if the cargo ship that transported our solar panels, was powered by solar cell technology itself? The world’s first cargo ship to partially power its propeller with solar panels left it’s harbor in Kobe, Japan this week, according to AFP. The goal of using solar panels that produce electricity to propel the ship is to reduce fuel costs and cut carbon emissions when product manufacturers ship off their exports.

Surprisingly, the cargo ship named Auriga Leader was developed by an oil distributor called Nippon Oil Corporation and Nippon Yusen shipping company. The solar array on top of the cargo ship consists of 328 solar panels. These are the same type of solar panels you would use to power your home or business. The 40 kW solar electric system can provide 2% of the ship’s required energy to power the propeller. You need a lot of energy to move a cargo vessel, so for a 40 kW solar electric system, 2% is quite impressive, wouldn’t you agree?

The shipping industry has been under pressure to reduce their carbon footprint because they are a big contributor to releasing green house gasses into the environment. As a country, Japan has the second most solar capacity installed compared to the rest of the world, since Japan is an island, they have been straying away from foreign oil for quite some time. Every year solar panels become more efficient, in the near future the entire cargo ship could be powered from solar panels, what do you think?