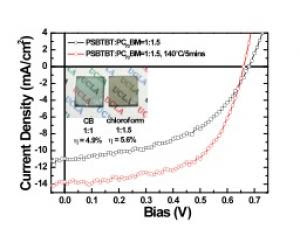 The UCLA Henry Samueli School of Engineering and Applied Science is working on a polymer based solar cell that claims to be highly efficient compared to what’s out on the market today. The special aspect of polymer based solar cells is they can bring solar everywhere, meaning solar panels that people could hang on the wall, similar to hanging a poster on the wall. If solar technology could become that easy to deploy, you would see solar cells integrated into virtually every product that requires power.

The UCLA research team discovered manipulating the silicon atom for a carbon atom in the polymer solar cell greatly improved the conversion of light into electricity, also known as the photovoltaic effect. The team has reached a 5.6% efficiency, which is great for these low cost solar cells. Traditional silicon based solar cells have an efficiency of over 20%, so these polymer based solar cells have a long way to go before they become as efficient as traditional silicon solar cells. The research team’s goal is to get their low cost, flexible solar cell to an efficiency to over 10%….do you think its possible? How long do you think it will take before solar cells are very common in our daily lifestyle?