Did you know over 3 million jobs will be lost if the Big Three Fail? As a clean energy supporter and free markets advocate I say SO WHAT! Not because I am a heartless soul, I do understand the human impact that will be caused by the collapse of these dysfunctional companies but because I have an insider’s view of the huge opportunity in terms of vehicles that very efficient and take advantage of renewable energy, they’re on the market today and getting better everyday.

The Big Three automakers (GM, Ford and Chrystler) should not get bailed out because their actions are the reasons why the automakers are in the position they are in today. Some people don’t know, but GM released an electric car called the EV-1 back in 1996 which could only be leased with a clause in the contract making it impossible for the lessee to ever purchase the car! In 2003, GM decided to cancel the electric vehicle project and destroyed their fleet of electric vehicles. According to GM’s CEO Rick Wagoner said the worst decision of his tenure at GM was, “axing the EV1 electric-car program and not putting the right resources into hybrids. It didn’t affect profitability, but it did affect image.” 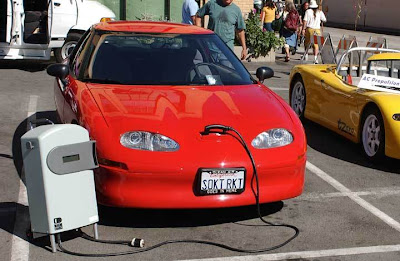 In 2007, GM R&D chief Larry Burns stated in a Newsweek article, “I wish GM did not kill the electric vehicle project and If we could turn back the hands of time we could have had the Chevy Volt 10 years earlier.” The Chevy Volt is an prototype electric vehicle that GM is rushing to complete, but does not know if the Volt will ever hit the market due to GM’s unstable position today.

It does not make sense..there was surging demand for the EV-1, long waiting lists, customers begging GM to buy the cars, but the automaker refused. Any savvy Business man would take the customer feedback as a sign of moving forward with a project. So why are the American automakers notorious for making fuel inefficient vehicles? It’s quite obvious the Oil Industry is in bed with the Big Three Automakers.

The Toyota Prius Hybrid is the best selling fuel efficient car in the US. Although full electric vehicles being manufactured by Tesla Motors right here in the good ole USA are in high demand too. Fisker Automotive is another company that is developing a sports Hybrid. Electrorides is selling an Electric Mini Cooper and a very interesting Utility Truck called the ZeroTruck, sweet an all electric truck! 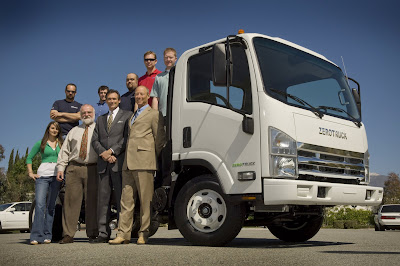 The point I’m trying to make is that there are entrepreneurial companies out there that can create a better car, that people are demanding today. If the Big Three fall, it would create a huge opportunity in the automobile market in which many new jobs would be formed, simulating the economy. People are already retrofitting hybrids with solar panels and charging up electric vehicles from solar electric systems. These new vehicles would also simulate the “new energy economy”. Should we bail the US auto industry out too? Can we afford to?