Boooo! Today is Halloween, millions of people across the US are going to enjoy pillow cases overflowing with candy and the ghouls n’ ghosts are going to come out at night. This year is going to be different because more people are using renewable energy to get them through the night. Trick or Treaters need flash lights to stay safe in the dark, this year more people are using solar powered flash lights, charge it up during the day and use it all night. Combining solar with LED light bulbs can be a very effective combination, since LEDs are very efficent, they only use up a couple watts, a small solar panel could power could provide enough power for a night of trick or treatin’. 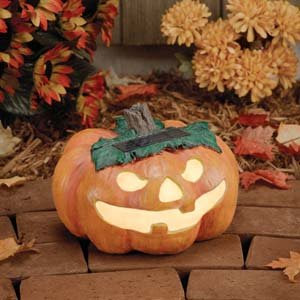 The solar Halloween pumpkin statue is another example of how people are using small solar panels and LED lights to power up their pumpkins this year. Its quite simple how it works, the solar powered pumpkin has a rechargeable battery enough to power the LED inside the pumpkin and will automatically turn on at sunset, glow for up to 8 hours if fully charged during the day. Generally, one of the biggest advantages of using LED light bulbs is their long life time, the LED within the pumpkin has a lifetime of 100,000 hours!

Another interesting story I heard between the relationship of renewable energy and Halloween on this week’s Inside Renewable Energy Podcast by Stephen Lacey of RenewableEnergyWorld.com featured a special guest named Jake, a 9 year old who decided to dress up as “BioFuel Man” to educate others about the benefits of renewable energy on Halloween in his community. How amazing is that?

The purpose of this post is to point out the little applications and grass roots promotion in the local community level of renewable energy end up making a big impact. For example, many people who don’t understand how solar power works, could have a basic understanding by just looking into a solar powered pumpkin. The end goal would be just to get them to thinking about how renewable energy can be applied to other aspects of their lives, such as using solar panels to power their homes or filling up their tanks with renewable fuels.