Home » DIY Solar » The Path of the Sun Across the Sky

The Path of the Sun Across the Sky 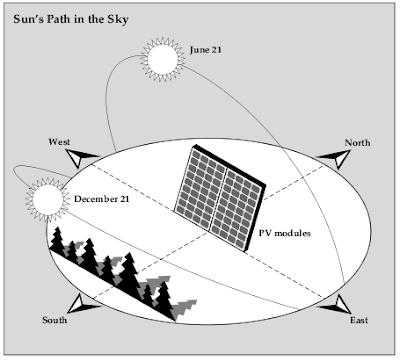 The sun raises and sets everyday, but the path the sun takes across the sky can differ between seasons. Azimuth is a concept defined as an angle measured in degrees between a reference plane and a point. When installing solar panels to ensure maximum system output you must consider the azimuth of the sun. Obviously, the days are longer in the summer and shorter in the winter, this is because the sun is traveling on different paths across the sky.

In the winter the sun is low in the sky, on December 21st the shortest day of the year is called the Winter Solstice, at this point the sun is a the lowest point in the southern sky. Each day after Winter Solstice the Sun’s path goes up higher in the southern sky. The Summer Solstic occurs on June 21st which is when the sun follows a longer path through the sky. As the sun moves through its yearly rhythms is important to take note what may not be a shading issue in the Summer could be an issue when the sun changes its path in the winter.

The diagram above provided by the US Department of Energy shows an example of the difference between the summer and winter sun in relation to a solar photovoltaic panel.