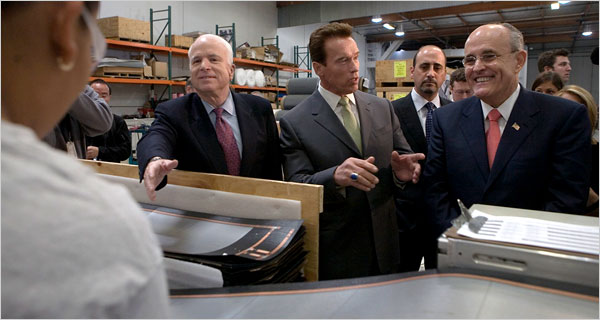 Today, McCain made it very clear that he does not support subsidies for solar power, although he did promote incentives for nuclear power (sounds a little like Bush to me). At an event hosted by REI, a major player in the outdoor and clothing industry, the CEO of the company explained to McCain what REI is doing to minimize their impact to climate change. McCain asked a straightforward question to the executives, “What do you want me to do?”

The CEO of REI went on to explain that the company plans to install solar panels on their retail shops in Arizona, California and Oregon although there are no federal incentives to help with the costs.

McCain’s response was shocking, he stated that he is skeptical of subsidies in general, although does support them for nuclear power and the oil & gas industry. He noted that the over-subsidization of the Solar Industry in the 1970s led to “some pretty shoddy material.” McCain said, “When government jumps in and distorts the market, then there’s unintended consequences as well as intended.”

Then tell me why we give BILLIONS of dollars to big oil every year in subsidies? Is it because they are funding the McCain campaign?

I seriously don’t understand this guy, hes from Arizona for Pete’s sake! There is an abundance of free energy falling from the sky everyday, and this guy is promoting nuclear power? Which is dangerous and could be used as a weapon in a terrorist attack!

McCain needs to understand we need to follow the footsteps of the countries who have already established great energy polices and use renewable energy as a large part of their portfolio. Distributed energy is the future no matter if McCain is president or not, the people want solar power and solar power they shall receive!