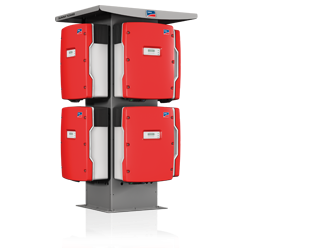 The advantage of using a Sunny Tower in a commercial application versus one central inverter is the increased reliability since multiple SMA inverters are linked together to increase capacity. Therefore if one inverter goes down in the Sunny Tower the entire solar electric system does not fail.

The unique design of the Sunny Tower requires less installation space which is a big plus when you encounter a project site with limited space to install the inverter. SMA claims the Sunny Tower offers the lowest cost per watt for a commercial solar grid tie inverter solution. What do you think about the Sunny Tower?