santa moncia forces solar panels to the back of the bus 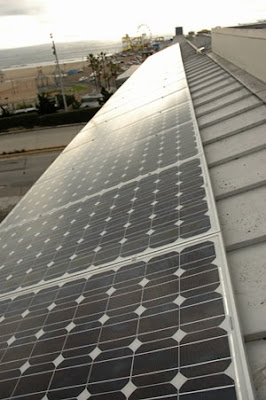 A critical aspect in evaluating where to install photovoltaic systems, especially on an existing building, is the performance of the system. However, there is no reason that the solar installation professional should not also consider aesthetic aspects when designing a system. To address this concern while retaining a ministerial review process, the proposed ordinance would require solar equipment to be installed in the location that is least visible from the street, with the provision that energy performance is not significantly reduced or the cost of the solar system is not significantly increased compared to a location that is more visible from the street.

The new city ordinance was introduced on June 30th but still needs to go through a second hearing before it goes live. The city of Santa Monica claims that by requiring citizens to install solar panels on the least visible location, it would help the city streamline the permitting process, what a bunch of baloney!

If anyone from the city of Santa Monica is reading this blog post, especially a city official. What I want you to know is that by forcing citizens to install solar panels in the least visible location the city is BREAKING THE LAW. According to California’s Solar Rights Act It’s illegal for any city to create unreasonable barriers to the installation of solar energy systems, including, but not limited to, design review for aesthetic purposes. The only reason the city can block you from installing solar panels in the area you prefer is if the solar panels pose a public health concern. check out the paper below highlighting real case studies of the California Solar Rights Act.