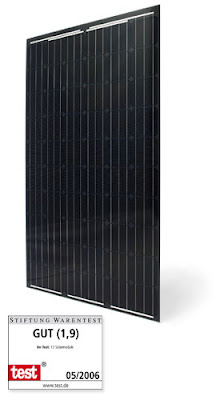 Sunways is a solar panel manufacturer we don’t hear much of over here in the U.S. although the company is a well known supplier of solar panels across the pond in Europe. What caught my eye is their SM215L model, which is a sleek black frameless monocrystalline solar panel that closely resembles the sought after frameless FirstSolar thin film solar panel. The increased aesthetic appeal of Sunway’s SM215L allows the solar panel to be used in the most challenging architectural applications.

The company gives the solar panel a “OutputPlus+” rating which claims that the actual electrical output in real world conditions is higher then what is rated by the manufacturer. I think sleek black solar panels are great for residential applications, many times aesthetics is a huge decision making factor when people are buying solar panels for their homes. Typically on commercial buildings with flat roofs, aesthetics is less of a concern. What do you think about frameless solar panels?