Today, on Earth Day we had the chance to talk to the Hollywood Sign Trust of putting solar panels on the Hollywood sign, In my opinion the Trust was most engaged when we showed them the 3D renderings which featured four designs of how the Hollywood Sign and solar panels could co-exist. The solar electric systems we proposed are grid connected, meaning the energy is transferred into the network, the community can benefit from the power especially when there is peak demand. Grid connected systems also help California reach it’s RPS (renewable energy portfolio standard) a requirement for CA to generate power from clean renewable resources. 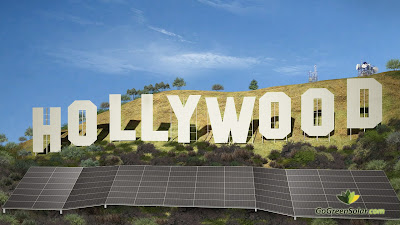 The most practical concept that is very common on hillside solar panel installations through out the world. This deployment of solar panels is the most technically feasible and has the highest probability to be a safe,code compliant installation that can generate the most watts per square foot. 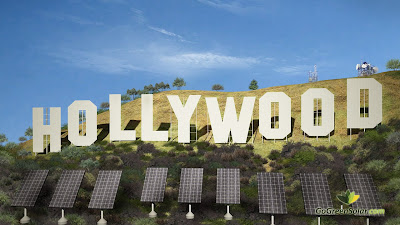 Pole mounted solar arrays are a common practice in the solar industry. These components are available in the marketplace. The advantages of a pole mounted system it’s raised above the ground to reduce accessibility to the public also the solar panels can be adjusted to the optimal orientation and pitch to maximize energy harvest. 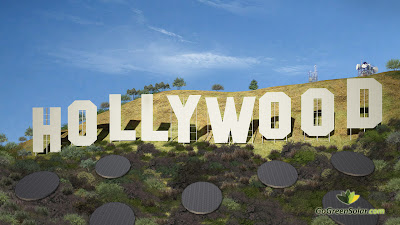 Circular solar panels that sit beneath the sign. These type of solar panels do not exist in the marketplace although they can be fabricated using UL and IEEE approved photovoltaic material. The difficult aspect of this layout would be connecting each panel together since they would be sitting far apart. Since the panels sit on the ground it would require maintenance of the vegetation growth from shading the solar panels. The national electric code is unclear of how it would apply to a solar panel that lays on the ground. This concept is more of an idea than a practical solution. 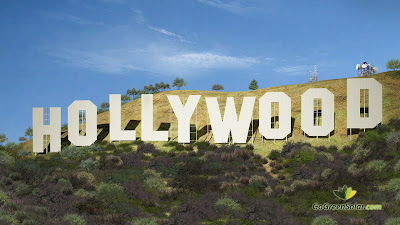 Building Integrated Photovoltaics is the art of integrating solar cells into the facade of a building. In this design the white paint of the sign actually has nano solar cells that generate clean power. This technology is still in the pipeline, although once solar nano paint technology is out of the lab, its going to change the possiblities of what we can do with solar power, any facade can be converted into an energy producing asset. It is still unclear what rules will be imposed by the national electric code governing paint with solar cells. This concept is the furthest from practicality at this point in time.

I want to know what you think? Which concept do you like the best? If you were a member of the Hollywood Sign Trust what would be your biggest concern in adding solar panels to the famous landmark?