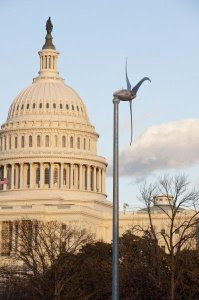 The United States Botanic Garden a couple blocks away from today’s historic inaugural for quite some time have had two wind turbines installed, although today they got special attention from the president himself as he mentioned solar and wind power in his acceptance speech. Hopefully the millions of people who went to Capitol Hill for Obama’s inaugural noticed the Skystream 3.7 and Mariah Power’s Windspire small scale wind power systems.

The Skystream 3.7 shown in the picture above is a horizontal axis wind generator which has a built in grid tie inverter. The generator makes most financial sense in regions which have at least 10MPH average wind speeds. The Skystream 3.7 also has the ability to wirelessely transmit inverter data which enables the owner to monitor the performace of their wind power system through their computer. 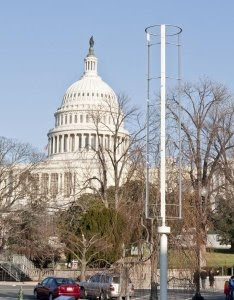 Hopefully Obama’s administration can secure the capital it needs to execute projects that support the development of a renewable energy market in America which will enable more homes and businesses across America to use the small scale wind power systems to contribute to the grid versus being a liability to it. What do you think?