disconnects for your clean energy system 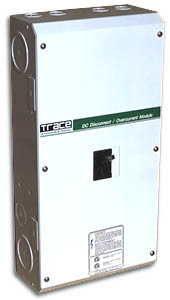 Clean energy systems such as a wind turbine or solar panels which produce electricity that are attached to a building need to have safety devices called “disconnects” according to the NEC (National Electric Code) Each major component of a clean energy system including inverters, and charge controllers, batteries (if your system is battery based) must be able to be disconnected from sources of power.

To be compliant with NEC code, your disconnects must:

The picture above shows a Xantrex DC Disconnect that meets all NEC code requirements. Overcurrent protection circuit breakers maybe used as disconnects. Only switched fuses can be considered disconnects. The NEC code says a solar photovoltaic system can have 6 or fewer disconnects, switched circuits or circut breakers to cut off all sources of power.