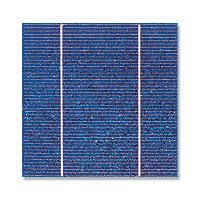 Blue Square Energy, is a developer and manufacturer silicon based solar cells. The company recently announced that they had their new solar cell using bright point technology independently verified from National Renewable Energy Lab (NREL) at an efficiency of 14.6%. While the Blue Square solar cells are not the most efficient on the market, this is a remarkable efficiency since this cell is made out of lower grade silicon called UMG (upgraded metallurgical-grade) silicon. Lower grade solar cells with higher efficiencies mean more affordable solar panels that achieve a faster return on investment (ROI)

Solar cells are made up of silicon and up till now inexpensive silicon was considered not suitable for the solar cells now through Bright Point Technology can be used to offer solar panels at a price more people can afford without sacrificing the efficiency of the solar panel. According to the company, through proprietary manufacturing processes Blue Square will soon offer the most cost-efficient solar cells on the market. Blue Square says they have turned the impurities in lower grade silicon into an advantage by finding a way to use them to our advantage. Do you think solar cell manufacturers will be able to find more techniques to turn low grade silicon into high performing solar cells? Will this type of process be more common as solar cell developers look for ways to reduce the cost of going solar?