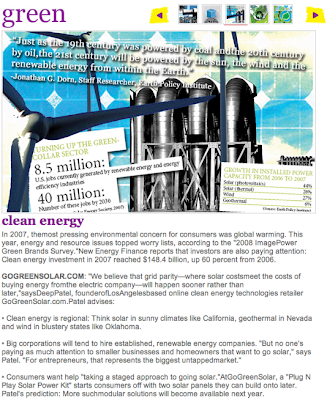 Lot’s of people have been calling us this week and said they read about us in the December 2008 edition of Entrepreneur Magazine called Trends to Watch in 2009, I got a chance to pick up the magazine today at Borders bookstore to find out what all the buzz is about. The important aspects of the article is that it points out that renewable energy is geographical, meaning that solar is better in some areas and wind power is better in certain areas, the rate of return on your clean energy investment all depends on the resources you have available to you. Another important aspect is that systems are modular, meaning you can start small and scale the systems up to meet your energy production goals, you don’t have to necessarily start off by eliminating your entire electric bill which typically relates to a high upfront investment.

The trend I see in clean energy moving forward is it’s going to get more affordable, the technology is going to be more efficient, utility electric rates are going to skyrocket and solar and wind power systems are going to get easier to install. Thus, eventually turning clean energy into an appliance that people can install in less time. We’re going to see grid parity sooner than later, don’t you agree?