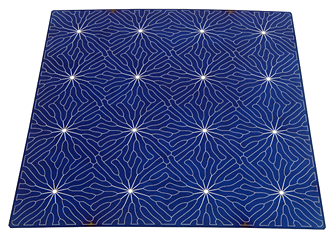 Solland Solar, a solar cell manufacturer based in The Netherlands has developed a unique looking photovoltaic cell called the Sunweb. Not only does the new technology look cool but the Sunweb solar cell concentrates the generated electricity to the back of the cell, resulting in a 2% higher output per cell. The Sunweb solar cell was developed in conjunction with the Energy Research Center of The Netherlands. Typically, with traditional solar cells, a bus bar on the front of each solar cell result in a smaller surface area to collect sunlight. Although with the SunWeb the bus bars are located on the back of the cell allowing more surface area to generate electricity.

Commercial production of the SunWeb solar cell will begin in 2009. We’re seeing more developments down to the cell level in increasing efficiency of a solar power system, every time the industry makes developments to increase the efficiency solar becomes a more attractive solution for the mainstream public. Even though the Sunweb only increases output by 2%, every small gain is a step in the right direction. What do you think?