What an exciting day! I always enjoy the first Saturday of October because of the ASES National Solar Tour that is held every year across the nation. People who have solar panels on top of their roofs open up their homes to the public to answer questions about their systems to interested parties.

The National Solar Tour is the largest grassroots solar event in history, it’s the only event in which you can Tour homes and buildings to see how your neighbors are using solar energy to reduce their monthly utility bills. There were many homes open in Southern California although I had time to visit three locations. 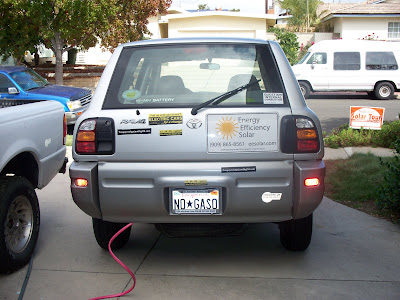 Doug Korthof’s home is my favorite stop of the the tour every year not only because of cool 4.2 kilowatt (kW) solar power system with battery backup that can last through a 2 day power outage. Doug has got his hands on a couple rare Electric Vehicles (EV) including an Electric Ford Ranger, WV and Toyota RAV4 that he can plug right into his solar power system. You may recognize the name Doug Korthof from the movie, Who Killed the Electric Car? Doug has been a long time EV activist and is an organizer of the SoCal Solar Tour.

The Toyota RAV 4 was charging when I was taking pictures of it. Toyota does not offer these EV to the public anymore. Luckily Doug was able to acquire one of these rare jewels before they were taken off the market. Hahaha, very creative license plate! With Doug’s setup with solar panels competing against his electric rate and fuel costs, I bet his investment in solar energy has broken even very quickly on the cost of his solar power system.

Below is a picture Ford Ranger Electric! Part of Doug’s EV Fleet. Have you ever seen one of these on the road?

A sweet VW electric! All these cars have the ability to connect to a solar power system. The great aspect of a EV is that there is less maintenance involved. No oil changes, smog tests, valves, pistons, less moving parts, make EV more reliable and greener then traditional combustible engines. Imagine life without being attached to the gas station and utility company. Vehicle to Grid technology

A stop on the Costa Mesa Solar Tour hosted by Evan Little. This home featured a low profile 9.7 kW solar power system with Fronius IG inverters. The owner of the system recently installed this system through financing it by taking a loan from his 401k. His electric bill used to be around $1,000 a month although with this solar power system he has brought it down to around a $1 a month.

Chuck, the owner of the home said he interviewed a number of solar contractors before he selected the one he wanted to do business with by taking to Customers and reviewing testimonials before he selected his installer. The owner says the highlight of owning his system is walking outside to the grid tie Fronius inverter with his morning cup of coffee to watch his meter spin backwards puts a big smile on his face every morning!

Yes, those are solar roofing shingles, a rare sight to see. This is one of the only homes in Southern California that has solar roofing shingles. Although they do not produce as much energy as traditional solar panels, they are great for the people who want to offset their usage from the utility company. Like traditional grid tie solar panel systems, these solar photovoltaic roofing shingles are no different, extra energy generated is sent back into the grid spinning the owner’s meter backwards. Some home owners who do not enjoy the looks of solar panels on their roofs prefer the solar shingles because of their ultra low profile nature.

It’s very hard to tell that those shingles actually have solar cells embedded in them. Most of the people on the tour had no idea that the home had special shingles until it was brought to their attention. Solar roofing shingles are an example of Building Integrated Photovoltaics. Is producing less electricity worth the better looks of the solar shingles? Which do you like better solar panels or solar shingles?