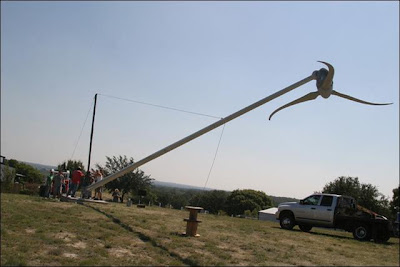 According to an article titled, “Wind turbines smart choice, energy savers” by Danie M. Huffman of the Weatherford Democrat a man named Curtis Kelly got sick of his high electric bills and decided to invest in a Skystream 3.7 to offset this dependence on the utility grid and lower his monthly bill. Kelly has paid up to $340 per month for his electric service and wit the Skystream 3.7 he could see a reduction of $80 – $120 dollars per month on his bill depending on the wind speeds he receives that month.

The SkyStream 3.7, developed jointly with the US Department of Energy is one of the most reliable grid interactive small scale wind turbines on the market and the payback period can range from 5 to 7 years. The wind turbine makes most financial sense when there is an average wind speed of at least 10MPH. Many companies claim that the SkyStream 3.7 can eliminate a customers entire electric bill, although most likely it will just reduce consumption because most customers use a lot of energy, and it would take more than one SkyStream 3.7 to eliminate a bill.

Kelly chose the SkyStream 3.7 because of the built in inverter, that turns the DC power into AC electricity that is used by most appliances and the quite nature of the wind turbine itself made the SkyStream 3.7 stand out as he was making his decision on which turbine to go with. The longest part of the installation is pouring the concrete base and allowing it to cure for two to four weeks, the wind turbine itself can be put up within a day. There are customers who are comfortable installing the SkyStream 3.7 on a Do-It-Yourself basis while others require a professional to help them with the installation similar to Kelly. What do you think about small scale wind power? Do you think they are a feasible option for the common American to reduce their dependence on the grid? Please Discuss!