Still reporting from Solar Power International 2008, the show has been a sell out and there are over 15,000 people from all over the world at the conference. There are some interesting products that have hit the market that I want to show you.

Let’s start off with the concentrated photovoltaic (CPV), these products are used for utility scale generation. Concentrated solar power is magnifying sunlight on to a small amount of solar cells to create a greater output. 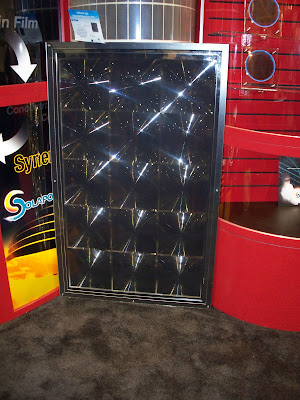 Hitachi has entered the solar power industry, although they are focusing on utility scale products such as the magnifying lens pictured above. The special lens attaches on top of solar cells that are designed to perform reliably in extreme heat conditions.

Sharp Solar has been developing solar panels for a long time, although at this show they have showcased a concentrated photovoltaic panel similar to the design of Energy Innovation’s Sunflower CPV solar panel. This is the first time I have seen Sharp Solar display a concentrated solar panel, I think this is an industry trend, more solar panel manufacturers are diversifying into the CPV space. Green Volts has developed an interesting design which can concentrate sunlight into a neat looking panel and racking system. Green Volts claims that their system can compete with traditional fossil fuels in terms of cost to generate electricity. The unit showed below is rated at 100kW, pretty small footprint for a 100kW capacity, don’t you think? 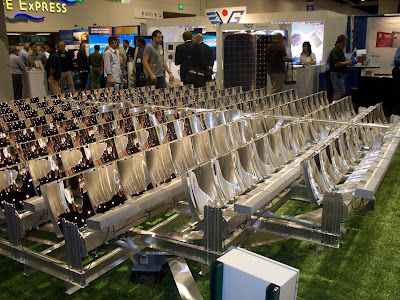 Evergreen Solar has released their new ES-A series that claims you will receive the power output rated on the nameplate. Most of the time, solar panels except a few out on the market can guarantee the rated output. With the new ES-A series, if you buy a 200 watt panel, you will be getting 200 watts. The UL4703 cables that are integrated within the solar panel can work with new inverters that are transformer-less, such as the upcoming SMA SunnyBoy 3000HF. The new Evergreen Solar Panel also comes with new extended length cables, which eliminates home-run wiring and lockable connectors that complies with the latest codes for accessibility of solar arrays. The Evergreen ES-A will be offered in 200, 205 and 210watt versions and is backed by a 5 year workmanship and 25 year power warranty. 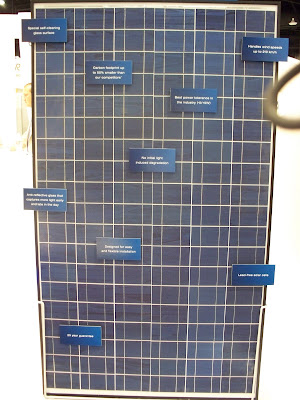 I have to go now, but I have more pictures and videos, more to come soon! Fresh product content and news stright from the source, Solar Power International 2008. Stay Tuned!