Solar Power International 2008 has been a blast, what an exciting conference it has been! Today, is the last day the exhibit hall will be open and the crowd is dwindling down and the exhibitors are ready to pack up and go home. Before they close out here and kick us out of the exhibit hall lets take a look at some very exciting products in the rapidly growing solar power industry. 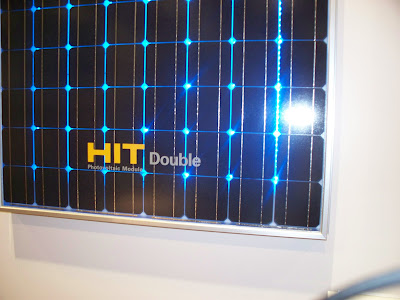 A two faced solar panel, collects energy from the front to the back of the panel! The back face of a HIT Double panel generates electricity from ambient light reflected off surrounding surfaces, and combines with power from the front face of the panel. Depending upon system design and site albedo, this results in up to 30% higher power generation (more kWh) per square foot. These panels are great when mounted on parking and patio covers. 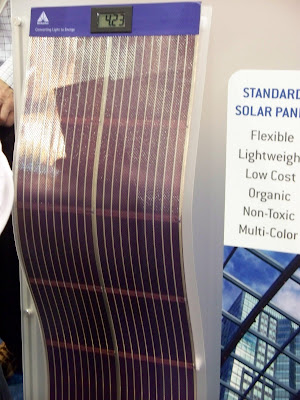 Ultra Flexible, lightweight thin film solar cells made out of organic plastics versus silicon. This thin film solution can be integrated into products such as solar backpacks, flexible cell phone battery chargers, the possibilities are endless of where this thin film product can be implemented. As you can see from the picture, indoors in low light level conditions, the flexible thin film roll is producing 4.23 volts. 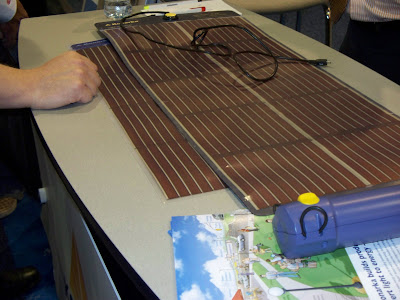 OnEnergy solar power system includes Sharp Solar Panels, plus a low profile racking system that can be installed on asphalt-shingle, flat-concrete tile and even curved high-profile “Spanish” tile roofs without compromising the integrity of the roof. OnEnergy system is UL listed as a complete system and can be easily retrofitted on existing roofs or installed during new home construction. 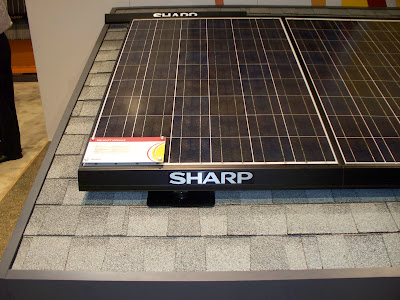 Sharp also displayed a “thin film” solar panel which are less efficient than traditional silicon based panels but on the flip side cost less per watt. Typically thin film solar panels make most sense when you have a lot of surface area to play with. 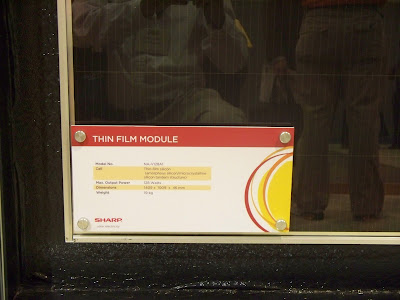 The Integra Flush and Alternative Mounting systems resembles Sharp’s OnEnergy system. These systems are supposed to look attractive on the roof and are designed to be very streamlined to save the installer time, money and avoid critical mistakes during the process of mounting solar panels to residential roofs. 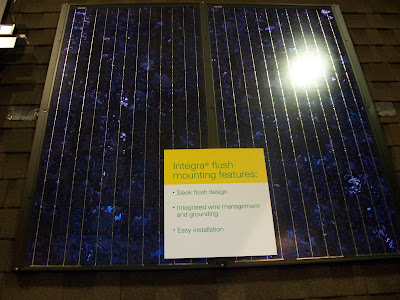 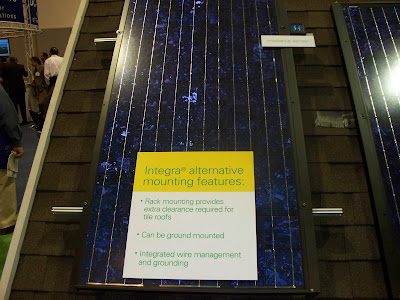 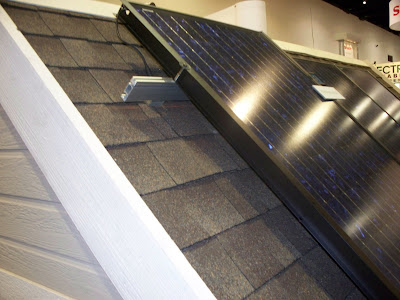 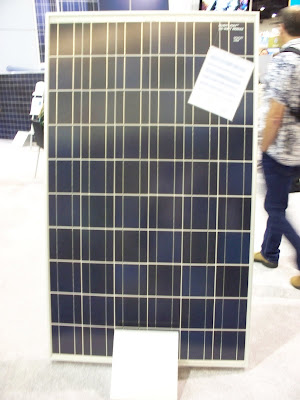 Schott Solar showed off their Poly 225 series which will be manufactured right here in the good ole USA, specifically in New Mexico. The company did not have a spec sheet or to much information on the solar panel since its not out on the market yet, although its been great to see more panels that are breaking the 200 watt mark. I am seeing many solar panel manufacturers now offering panels in 200, 210, 220+ rated output. Do you think this trend will continue? 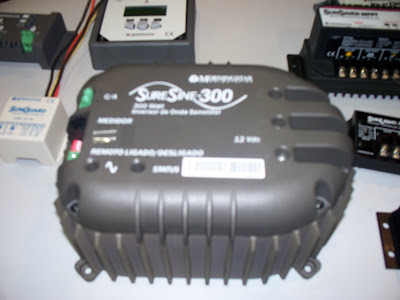 MorningStar has a pure sine wave off-grid inverter that is rated at 300 watts, this is perfect affordable inverter for a small off-grid project. The inverter provides quality AC power equivalent to power you would receive from the grid. The inverter features high reliability because it has no internal cooling fan or other moving parts which are typically prone to failure. This inverter is perfect to just get started with an off grid system for small applications.

Kaco offers highly cost effective and reliable grid tied inverters. The “Grey” Planet line is under development and is going to be released next year which will be an update from the “Blue” planet inverters. The Kaco Grey line will feature a built in communications port to add on a monitoring system so you can check the output and logs of your solar power system’s output right through the Internet. 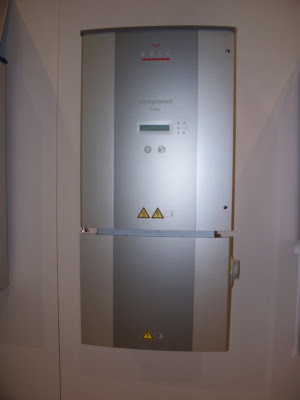 Similar to most new grid tied inverters on the market the Kaco Grey Planet has a integrated DC disconnect built right into the inverter. Kaco took it a step further by introducing an AC/DC disconnect with one knob that can turn two ways to either disconnect the AC or DC power, they did this because some utilities require DC or AC disconnects and a handful require both, so with the Kaco Grey Planet, the disconnect can switch off both AC and DC power. 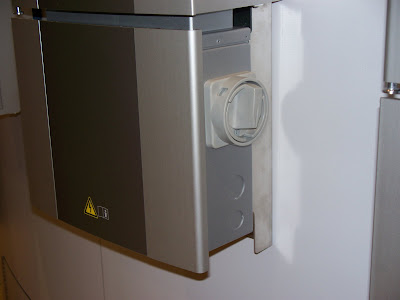 What I like the best about Kaco Grid Tie Inverters is the warranty. Typically inverters after 10 years can burn out and replacement could be required. Most inverters have a warranty period of 10 years, although Kaco has extended the Warranty, so after 10 years if the inverter goes out they will fix the inverter or give you a new one for only $500, what a great added security to a very highly reliable product line of cost effective grid tie inverters. 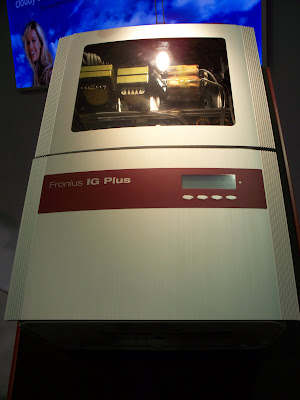 The next generation of the Fronius IG grid connected inverters. The IG Plus will come in a 3kw, 5kw and 10kw versions that feature built in DC disconnects, unique automatic transformer switching function that enables three equal efficiency peaks which results in high efficiency. The IG plus is the market leader in terms of efficiency, with a conversion ratio of 96.2% peak efficiency, for the states that offer rebates to customers based on performance like California, that means you qualify for a higher rebate. 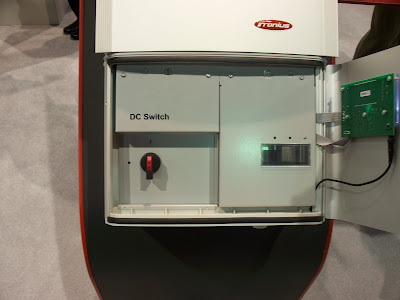 The picture above shows the lockable DC Switch,. 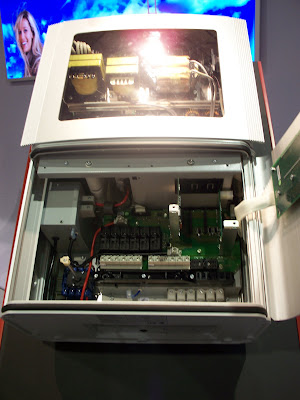 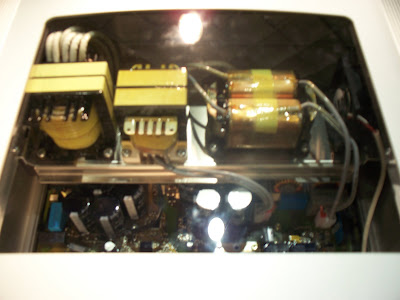 The internal components look like their very close together, don’t worry, The IG Plus isn’t going to overheat because of the smart ventilation design. Ambient factors such as biological infestations, dust, moisture , coastal salt air, and heat stay outside the new Fronius IG Plus’ circuitry. Cool air is drawn in through a closed channel over a heatsink, this prevents contact between outside air and the circuit boards while cooling the inverter components ensuring the inverter operates consistently. 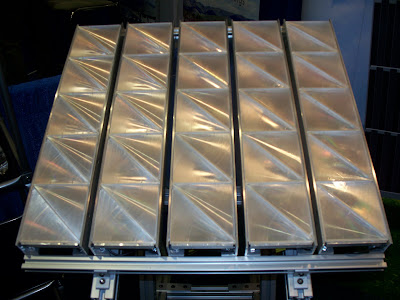 I feel this is one of the most interesting and my favorable Concentrated Solar Photovoltaic (CPV) product in development called the Sun Simba by morgansolar. The team is very passionate about their company and are not afraid to show off and talk about their product to interested people. Most of the CPV companies I visited at the trade show got angry if we took pictures of their products and some of them went to extremes to shield their products behind black curtains on the exhibition floor, seems very odd, don’t you think?

What stands out about the Sun Simba is the passive cooling, when concentrating high amounts of sunlight heat can be a problem, although the Sun Simba remain well within the heat tolerances of materials and PV cells, even in highest temperatures. The Light Guide Solar Optic (LSO) is different, more affordable and better than conventional optics. The LSO is the foundation of the Sun Simba HCPV. The LSO bends and directs sunlight that strikes the surface of the panels concentrating it onto high efficency multi-junction cells, this is where the product stands above its compeditors, because the Sun Simba has the ability to manipulate the right and redirect it accurately onto solar cells.

By eliminating almost everything that is not concentrating light or converting it into electricity, the morgansolar team has developed a lightweight, east to assemble system that is cost competitive yet highly reliable. The Sun Simba is made for large utility scale installations mounting 45 kilowatts (kW) on each tracker. The company is currently testing prototypes and establishing the manufacturing process and will be selling in late 2009. The team also stated they are working on products for the residential market which include a clear glass that can turn windows into assets that produce electricity. I am really looking forward to this company’s success and I will continue to cover their progress as they evolve into the sales phase.

Well, I have to hit the road now, back to Los Angeles we go. It’s been very fun at the conference and I hope I have given you a good peak into the latest product innovations in the solar energy industry. What product stood out the most? What do you think is the game changer? what else do you wish to see? Please discuss!