I read a lot of articles out there related to solar energy and I’ve seen many different terms used by authors describing a Photovoltaic Module.

Photovoltaic Module, What does it mean? Its just a solar industry term that describes a solar panel that can covert light into electricity. But people often refer to panels as “solar arrays” or “solar cells” and I noticed many people get confused by the different terminology. So lets break it down, The Introduction to Photovoltaic Systems by the infinite power organization of Texas has a great diagram. 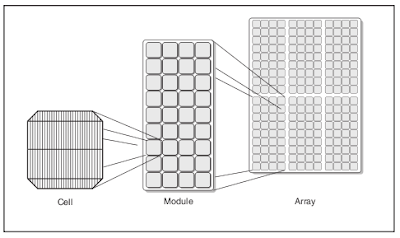 A group of individual cells make up a solar panel (module) and a group of solar panels create an Array. Typically, people install a solar arrays on their roofs or ground mount solar arrays, rarely solar arrays are mounted to tracking systems to follow the path of the sun. The number of solar panels that make up an array depend on individual project goal, budget and needs. The great aspect of a solar array is that the panels are modular, meaning you can add more panels to the array at a later date to generate more electricity.

There are a growing amount of people who are concentrating sunlight onto each solar cell that by magnifying the intensity of the sun and generating a greater output per solar panel, imagine taking a large magnifying glass and putting it over a solar array. Over clocking a solar panel, just like people over clock computer processors for more processing power.